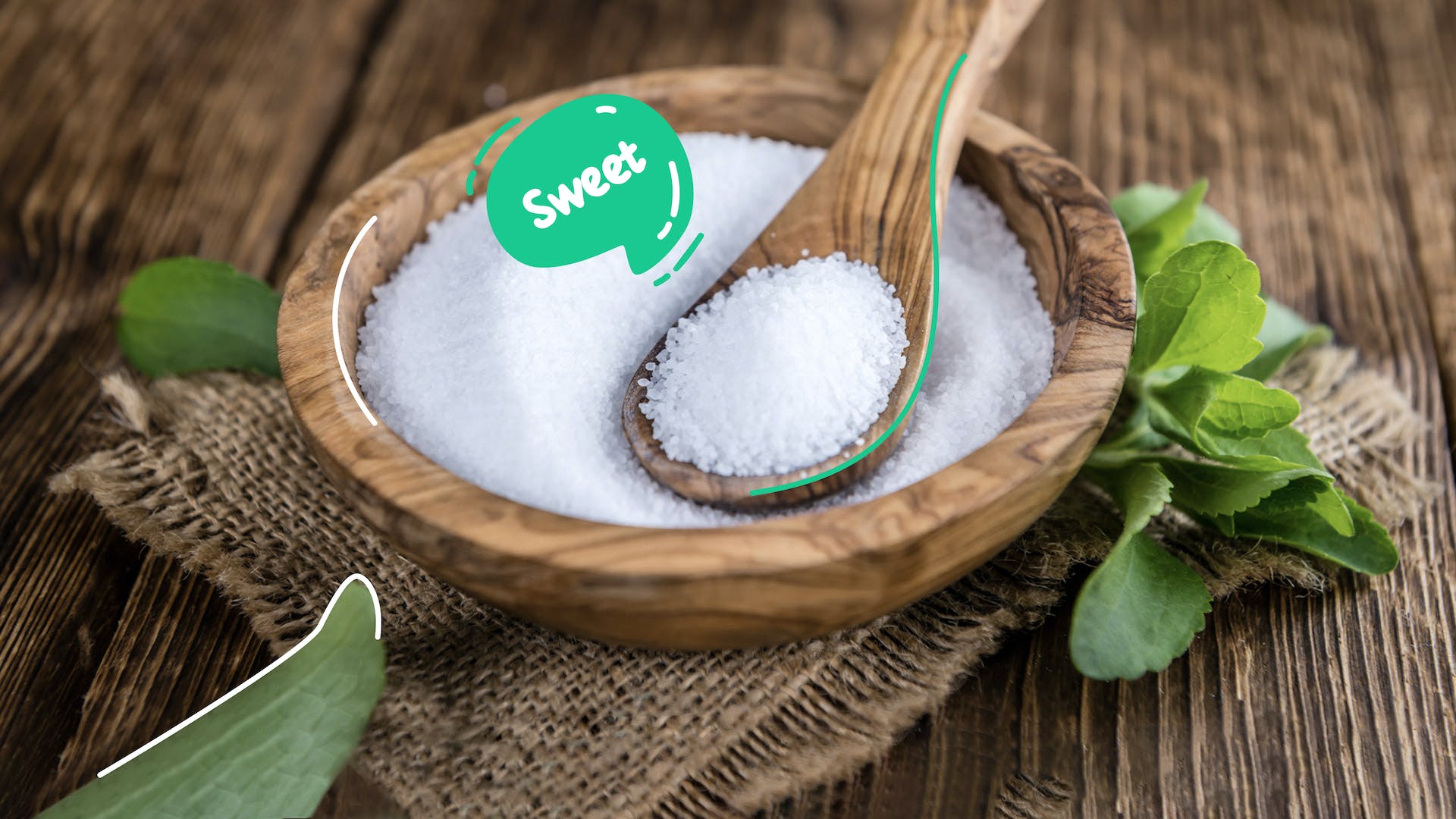 Sugar cravings are a common experience in the early stages of a Keto diet. While they typically go away as the body adapts to a lower carb intake, they can be difficult to manage initially.

In this article, we will take a look at some of the best Keto-friendly sweeteners to help satisfy a sweet tooth, as well as those that you might want to limit or avoid.

Should You Use Sweeteners on Keto?

When it comes to using Keto-friendly sweeteners, there’s no right or wrong answer - you’ll find valid arguments on both sides.

One major plus of certain sweeteners on Keto is that they can satisfy sugar cravings without necessarily impacting blood sugar or kicking you out of ketosis. Theoretically,  enjoying the occasional low-carb dessert may mean the diet feels less restrictive, which may make it easier to follow for a longer time period. You get to have your Keto cake and eat it too.

However, any sweet taste, whether it's from pure sugar or a sweetener, is thought to activate the same reward pathways and dopamine release in the brain. This may contribute towards continued sugar cravings and addictions in some individuals, although this may not be the case for everyone.[*]

Ultimately, it comes down to individual preference and tolerance.

Some people can enjoy the occasional Keto treat and maintain a balanced diet. Others may prefer to steer clear entirely as it removes the temptation of just one Keto cookie turning into the whole jar...

What to Look for in a Keto Sweetener

The ideal Keto-friendly sweetener should hit the following criteria:

The Stevia plant is native to South America and has been used for more than 1500 years as a natural sweetener.[*]

Stevia is non-nutritive, meaning it contains zero calories, carbohydrates or other nutrients, which is great news for anyone following a Keto diet.

Depending on the variety of stevia, the active compounds can be 30-150 times sweeter than sugar, meaning a little goes a long way.[*] It has that familiar sweet flavor, but some varieties may come with a slightly bitter aftertaste with hints of licorice.

Stevia comes in both powdered, granulated and liquid form. Drops are more advisable as the powdered and granulated versions may be mixed with other fillers and sweeteners like maltodextrin or dextrose.

On its own, stevia has been shown to have no effect on blood sugar response[*] and may even lower blood sugar[*], making it a popular choice for people with diabetes and low-carb dieters. Studies suggest it may also lower blood pressure in some individuals.[*]

Refined extracts from stevia (steviol glycosides) are recognized as safe by the FDA[*], whereas raw and whole leaf extracts are currently not approved due to a lack of evidence.

Monk fruit is a natural sweetener extracted from the monk fruit plant, native to Southeast Asia. It has been used as a tonic herb in traditional Chinese medicine for thousands of years.

Monk fruit is also rich in antioxidants known as mogrosides. These account for sweetness[*] which can be 100-250 times greater than that of sugar.

One downside of monk fruit is that it can be expensive. As it is a relatively new product, there are also no studies available on the long-term impacts of regular use.

Erythritol is a sugar alcohol that has a similar structure to sugar, but is only partially digested by the body. It is typically created by fermenting glucose from wheat or corn starch, producing a fine white powder or granules.

Like stevia and monk fruit, studies suggest erythritol has no impact on blood sugar levels.[*]

Erythritol may cause nausea if consumed in large doses (50 grams in a single helping[*]), but otherwise is considered safe to use.[*]

Interestingly, erythritol has also been shown to be more effective in fighting dental plaque and caries than xylitol and sorbitol.[*]

Xylitol is another sugar alcohol and has a similar sweetness to regular sugar. It contains 2.4 kcal per gram - around two-thirds of that found in standard table sugar.

Animal studies suggest that in diabetic rats, xylitol can contribute towards a reduction in body weight and blood sugar, along with a significant increase in serum insulin concentration and glucose tolerance compared to a control.[*]

Sucralose is another zero-calorie artificial sweetener. It is 400–700 x sweeter than sugar so is only used in small quantities.

The impact of sucralose on blood sugar levels is not well established and may depend on previous use of artificial sweeteners:

There are also concerns around the potential negative impact sucralose may have on the gut biome[*] and the risk that it may break down and interact with other ingredients at high temperatures.[*]

So far, many of the studies on sucralose have been small or performed on animals, so we don't have any significant data on the long-term impacts. It may be best to opt for alternatives where you can, and to avoid using sucralose at high temperatures.

If you are craving something to satisfy the sweet tooth, why not try these delicious low-carb treats containing our favorite Keto-friendly sweeteners:

Sweeteners to Avoid on a Keto Diet

Now we’ve touched on the best Keto-friendly sweeteners, let’s take a look at those to limit or avoid.

Aspartame is one of the most commonly used artificial sweeteners, often found in diet sodas and other sugar-free foods. Over the years there has been much controversy around the safety of Aspartame. The FDA considers it generally safe for consumption[*] However, it's noted that certain people with the genetic disease phenylketonuria (PKU), those with advanced liver disease, and pregnant women with hyperphenylalaninemia should avoid aspartame due to the potential links with brain damage[*].

Dates, date syrup, honey, maple, agave, yacon and blackstrap molasses are commonly cited as being healthy sweeteners. While they are naturally sourced and may have certain healthful properties, any of these sugars still has the potential to kick you out of ketosis.

With yacon syrup clocking in at around 8g of net carbs per tablespoon, and the rest at upwards of 13g, it’s easy to see how these sweeteners can quickly eat into your daily net carb allowance. Although you could decide to incorporate some of these naturally derived sugars into your diet, you’ll likely be leaving less room for more satiating, Keto-friendly foods.

Another FDA approved food additive, maltodextrin is often derived from GMO-corn and is added to a variety of foods to enhance both taste and texture, as well as extend a product’s shelf life.[*]

However, this sweetener is not without controversy, particularly when it comes to a Keto diet.

High on the GI scale (overtaking table sugar), maltodextrin has the ability to rapidly spike blood sugar - something we should avoid if looking to stay in ketosis. Studies also suggest that maltodextrin can adversely impact gut health and increase the growth of bad bacteria, making this sweetener one to avoid on a balanced Keto diet.[*]

While there are some trace minerals and B-vitamins found in these sweeteners, they occur in small concentrations, making these only slightly healthier than the ultra-refined sugars they often replace.[*][*] Not to mention, both still contain a high number of net carbs, meaning these aren’t conducive to a Keto diet.

When it comes to choosing a Keto-friendly sweetener, it’s best to stick with stevia or monk fruit for the most part.

With zero net carbs and little to no effects on blood sugar, these sweeteners are ideal for satisfying sugar cravings with minimal, if any, known side effects. However, a little goes a long way and we’d recommend using these to help adjust your tastes to a low-carb diet rather than relying on them regularly.

Finally, always remember to check the label of any sweetener you buy to check for any hidden additives that might be sneakily upping the net carb count.