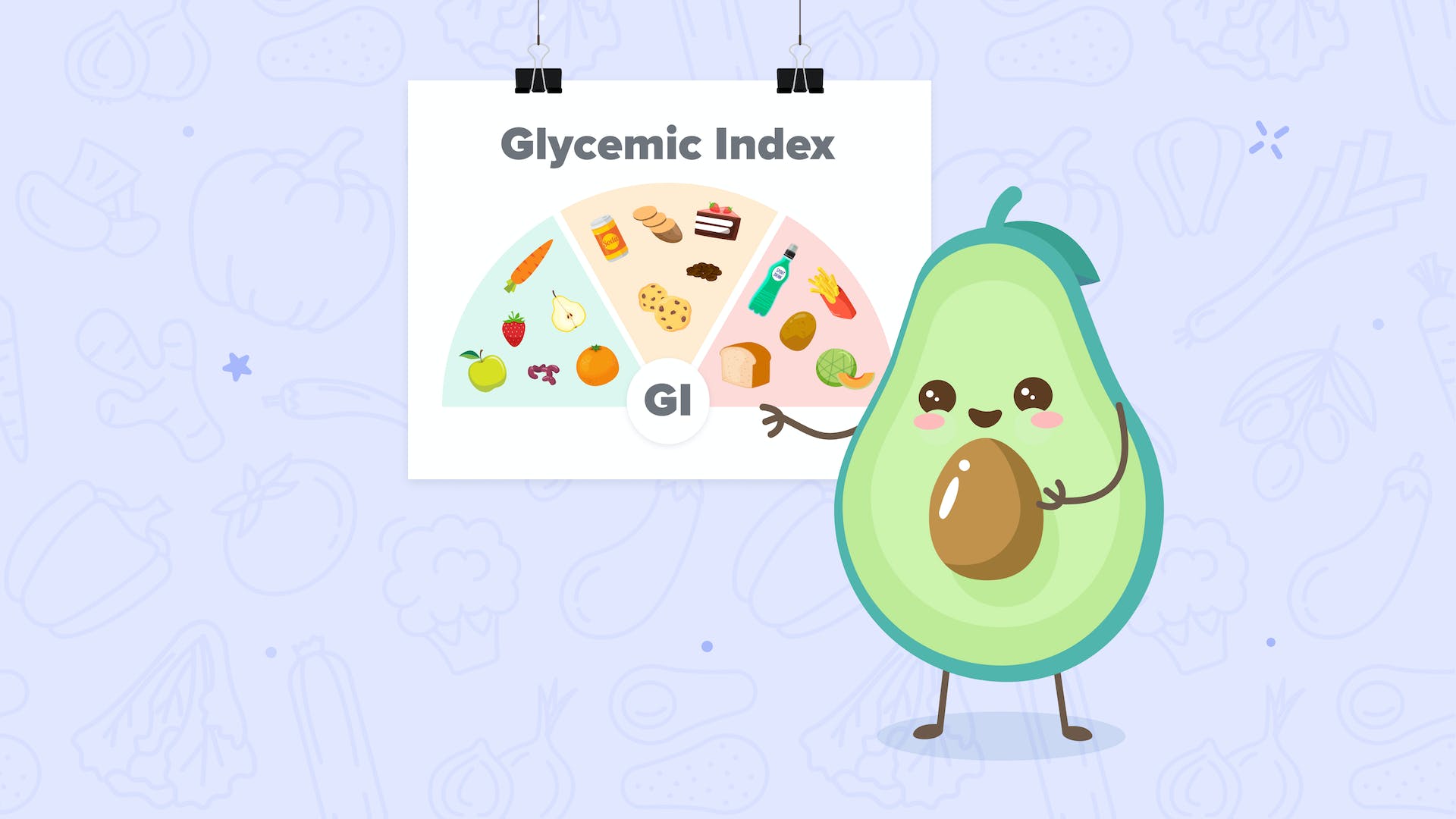 You may have heard about the glycemic index or “GI.” The glycemic index is a useful tool that may help you further reduce the glycemic impact of the carbohydrate-containing foods you eat or drink. In some ways, it allows you to have your proverbial cake and eat it too.

What is the glycemic index?

The word “glycemic” simply means glucose in the blood. Glucose is the primary sugar in our blood and can be used as a source of energy for most of our body’s tissues and organs.

The glycemic index (GI) is a relative ranking of carbohydrate-containing foods or drinks, on a scale from 1 to 100. Foods are ranked according to the rate and extent to which they raise blood sugar (glucose) levels after eating or drinking. Typically, pure glucose is assigned the GI value of 100.

Note that we have included a range of foods in our GI index chart, including some higher-carb options.

The GI of foods is measured using the International Standard Organization’s method. The GI value of a food or drink is determined by giving 10 or more healthy people a portion of the food or drink containing 50 grams (g) of available carbs and then measuring the effect on their blood glucose (sugar) levels over the next two hours.

Fifty grams of available carbs is equivalent to 3 average pieces of fruit or 3 slices of bread, but of course, not everyone eats that much in one sitting. In order to address this, a related concept called the glycemic load was invented. It combines both the quality (i.e., GI) and quantity (grams, or g) of available carbs in one measure. It’s the best way to predict the effect of different types and amounts of foods or drinks on blood glucose (sugar) levels.

Importantly, 1g of GL is equivalent to 1g of pure glucose.

The GL is relatively easy to calculate. The formula is:

Using an average small apple as an example.

It has a GI of 40%, and it contains approximately 15g of available carbs.

What about a slice of regular white bread?

Its GI is 70%, and it contains approximately 1 g of available carbs.

We can predict from this that 1 slice of regular white bread will have nearly twice the effect as an apple on blood glucose (sugar) levels. Therefore, you can think of GL as the amount of available carbs in a food “adjusted” for its glycemic potency. ﻿

It is also important to know that the GL is the most powerful predictor of a food’s effect on blood insulin levels – more powerful than the amount of total carbohydrate, sugars or dietary fiber.[*][*]

What are glycemic foods?

As you probably guessed, low GL foods and drinks have the least effect on blood glucose levels, and high GL foods have the greatest.

What is a low glycemic diet?

While we do eat some foods by themselves like fruit or plain yogurt, we typically combine a variety of different foods and ingredients to make a complete meal. For example, breakfast cereal with milk, bread with peanut butter, or beans with rice.

The GL of a mixed meal or diet can be calculated by adding together the GL values for each ingredient or component.

For example, if breakfast was a fruit smoothie composed of:

It’s important to consider that this low GI breakfast meal has 32.5g of net carbs (5.5g + 9g + 7.5g + 4g + 6.5g), but its GL of 15g tells us that it will have a much lower effect on blood glucose levels than expected if you were only relying on the net carb content – in fact less than half (46%). So, as the proverb goes, you could say that you can have your cake and eat it too, to some extent.

For the whole day, a target GL of 95g has been recommended for people consuming 2000 Calories (8,400 kJ) in order to reduce the risk of developing type 2 diabetes.[*] In other words, a low glycemic diet has a GL less than 95g per day for the average adult.

Therefore, for people consuming 3 meals per day, a low GL meal would have a GL less than 32g. So, our example breakfast is a low GL meal.

What are the potential benefits of a low glycemic diet?

GI has been around since the early 1980’s and GL since the late 1990’s, and consequently, there are several decades worth of high-quality research to support their use.

Initially, GI was conceived to help people with diabetes adjust their carbohydrate exchanges (serves of food that contain 15g of carbs) to improve their blood glucose management. There have been many clinical trials investigating whether using the GI helps people with diabetes manage their condition, and it appears that it does. Systematic reviews and meta-analyses of these trials indicate that glycated hemoglobin (HbA1c) – a longer-term measure of average blood glucose levels – improves by an additional 20 mmol/mol compared to regular healthy diets.[*] This is important, because HbA1c is a powerful indicator of the risk of common diabetes-related complications like heart disease, stroke, eye conditions and kidney disease.[*]

In addition to helping people with diabetes manage their condition, there is compelling evidence from large observational studies that low GI and low GL diets may reduce the risk of developing type 2 diabetes.[*]

Who should try a low GI diet?

Preventing blood glucose (sugar) and insulin levels from surging too high after a meal or snack is important for everyone for long-term health and wellbeing. Therefore, everyone that eats or drinks carb-containing foods can use the GI to simply swap their typical high GI foods for low GI alternatives. People who are overweight, have pre-diabetes or diabetes, or related metabolic conditions (e.g., heart and blood vessel disease) will of course benefit the most.

Is it a long-term diet?

Because it is relatively easy to construct a low GI or low GL diet that meets all of the Dietary Reference Intakes (DRI), it is safe to use long-term. Because you are not completely eliminating any food groups, but simply swapping out high GI foods and drinks for low GI alternatives and making sure you don’t eat or drink too many glycemic carbs overall, it can be adapted to most eating patterns: from low-carb to vegan.

We cook foods to increase their palatability and digestibility, making the nutrients that they contain more readily absorbed by our intestines. For example, boiling potatoes in water gelatinizes the starches within the tubers, allowing our salivary and pancreatic digestive enzymes easier access when we eat them, rapidly converting the starch to the sugar glucose which is absorbed quickly in the small intestine.

While in theory you could ask people to eat raw potato and measure the GI, in reality they are not very palatable or digestible. Therefore, most of the GI values you see in tables and charts are from foods that have been cooked and prepared the way people typically eat them. Because the GI is a relative ranking, if all of the different types of potatoes, for example, are cooked the same way, they can be compared easily.

How to get started on a low GI diet

The GI and GL are useful tools that can help you to minimize the effect available (net) carb-containing foods and drinks have on your blood glucose and insulin levels. Putting the GI and GL into practice is relatively easy. Simply choose the low GI food or drink within a food group/category and limit high GI alternatives. You can use the tool with essentially any dietary pattern that includes net carbs, from low-carb to vegan, and still enjoy additional health benefits.