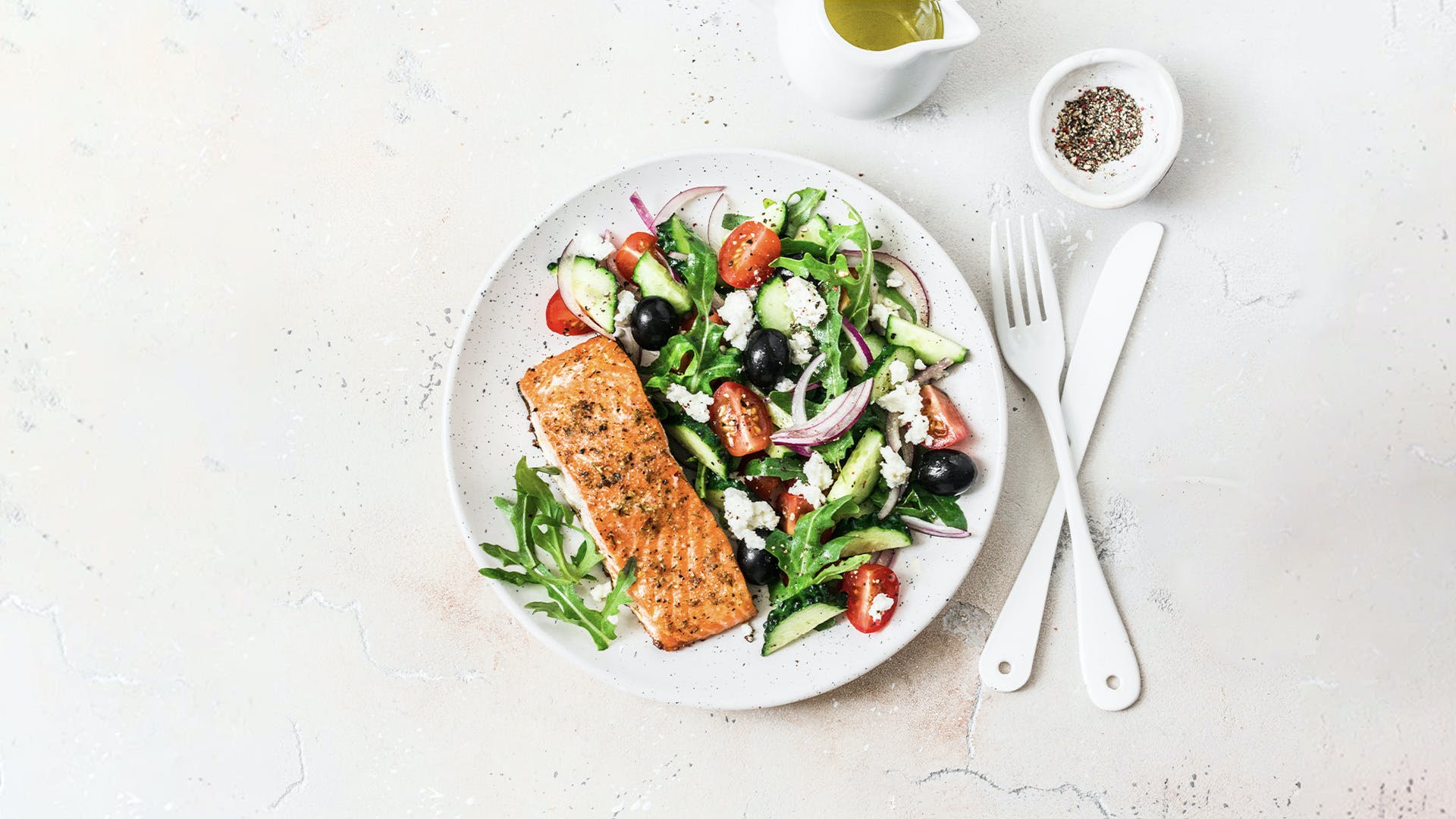 What is the Mediterranean Keto Diet?

What is the Mediterranean Keto Diet?

Mediterranean Keto is just a whole foods Keto diet with a focus on fish, olive oil, and red wine. Yes, you read that correctly: moderate red wine consumption is encouraged.

In today’s article, you’ll learn the rules of Keto and the Mediterranean diet, how they compare, how they differ, health benefits, and how to combine them. Let’s get started.

What Is the Keto Diet?

On Keto, you eat about 60% of your calories from fat, 30% from protein, and 10% (or less) from carbohydrates. Restricting carbohydrates and increasing healthy fat consumption is the key to entering ketosis, the fat-burning state after which the Keto diet is named.

Here’s how ketosis works. When you don’t eat carbs, your blood sugar stays low, which helps keep the hormone insulin low. And when insulin stays low, that signals your liver to burn fat (from body fat and dietary fat) and produce ketones.

Ketones? Think of these molecules as backup brain fuel. They help your brain (and other cells) stay sharp in the absence of carbs.[*]

There’s no shortage of Keto research. It shows promise with weight loss, cognitive health, diabetes reversal, inflammation, and much more.[*][*][*]

Keto may sound restrictive, but once your body adapts to using fat for energy, the carb cravings tend to dissipate. Plus, you can always eat some carbs, take a break from ketosis, and restart later.

What Is the Mediterranean Diet?

Back in the 1960s, researchers noticed that people living in France, Italy, Greece, and Spain had unusually low rates of heart disease.[*] Why?

Maybe it was their diet. These folks consumed fish, olive oil, vegetables, whole grains and the occasional glass of red wine. This general eating pattern became known as the Mediterranean diet.

There are many theories why the Mediterranean diet is healthy. It could be the antioxidants from olive oil, polyphenols from red wine, the omega-3 fats from fish, some combination, or something else entirely.[*]

Maybe it's the abundant sun and social ties (not nutrition) that makes people living in coastal Europe so healthy. After all, most of the data on the Mediterranean diet is observational.

In other words, it’s not clear that the Mediterranean diet causes good health. But at least at the population scale, it doesn’t prevent it.

Unlike the Keto diet, the Mediterranean diet doesn’t have strict macronutrient rules. But in general, it’s high in carbohydrates, low to moderate in protein, and fairly low in fat.

Here are the basic principles of the Mediterranean diet:

The Keto Diet Vs. The Mediterranean Diet: Similarities

Mediterranean and Keto diets have a couple of key features in common.

Both Keto and Mediterranean diets avoid refined sugar, packaged foods, and most other foods in aisles 1-10 of the grocery store. Because of this, both diets are a significant improvement over the Standard American Diet.

The Keto diet has shown the potential to promote weight loss and improve heart disease risk factors. Multiple controlled trials (especially in people with diabetes and obesity) support this point.[*][*]

The Keto Diet Vs. The Mediterranean Diet: Differences

Now for the main differences between a Keto and Mediterranean diet.

The Keto diet is very low in carbohydrates, generally allowing just 20-50 grams per day. Not true of the Mediterranean diet, which permits high-carb foods like legumes, lentils, whole grains, and root vegetables.

Optimal carb intake is highly individual. But for reversing type 2 diabetes or obesity, the latest science points to low-carb interventions like Keto showing the most promise.[*]

Carb restriction is also essential for the production of ketones, tiny molecules that may help improve cognition, boost energy levels, and reduce inflammation.[*][*] If you want the benefits of ketosis, you can’t eat many carbs.

On the Mediterranean diet, however, olive oil is king. Dairy and omega-3's also add a few fat calories.

Some claim that the Mediterranean diet is healthy because it limits saturated fat. Saturated fat is supposed to be bad for your heart, right?

How To Do The Keto Mediterranean Diet

This means that whole grains, beans, and root vegetables are out—and olive oil and fish are in. You can also eat leafy greens, cruciferous vegetables, eggs, poultry and (if tolerated) dairy.

With Keto staples like red meat, butter, and coconut oil either significantly reduced or off-limits, the Keto Mediterranean diet can be fairly restrictive, but here are a few delicious meal ideas:

Benefits of the Keto Mediterranean Diet

Several studies have looked at the Mediterranean Keto diet. Here’s what they found:

The takeaway? More controlled studies would be nice, but it’s a good bet that Keto Mediterranean works similarly to a standard Keto diet.

One last point. By banning saturated fat, Keto Mediterranean may solve a concern experienced by a subset of Keto dieters: elevated LDL cholesterol.

Should You Try The Keto Mediterranean Diet?

Before you dive in, understand that Mediterranean Keto is significantly more restrictive than a standard whole foods Keto diet. If Keto already seems restrictive to you, just wait until you eliminate certain meats, butter, and other sources of saturated fat.

But if you’re concerned about cholesterol levels on Keto—or if you simply want to experiment—go for it. Just be sure to monitor your bloodwork, body weight, energy levels, mood, sleep, exercise performance, and anything else that matters to you. That’s how you’ll know if it’s working for you. And if needed, find a registered nutritionist to support you on your journey.