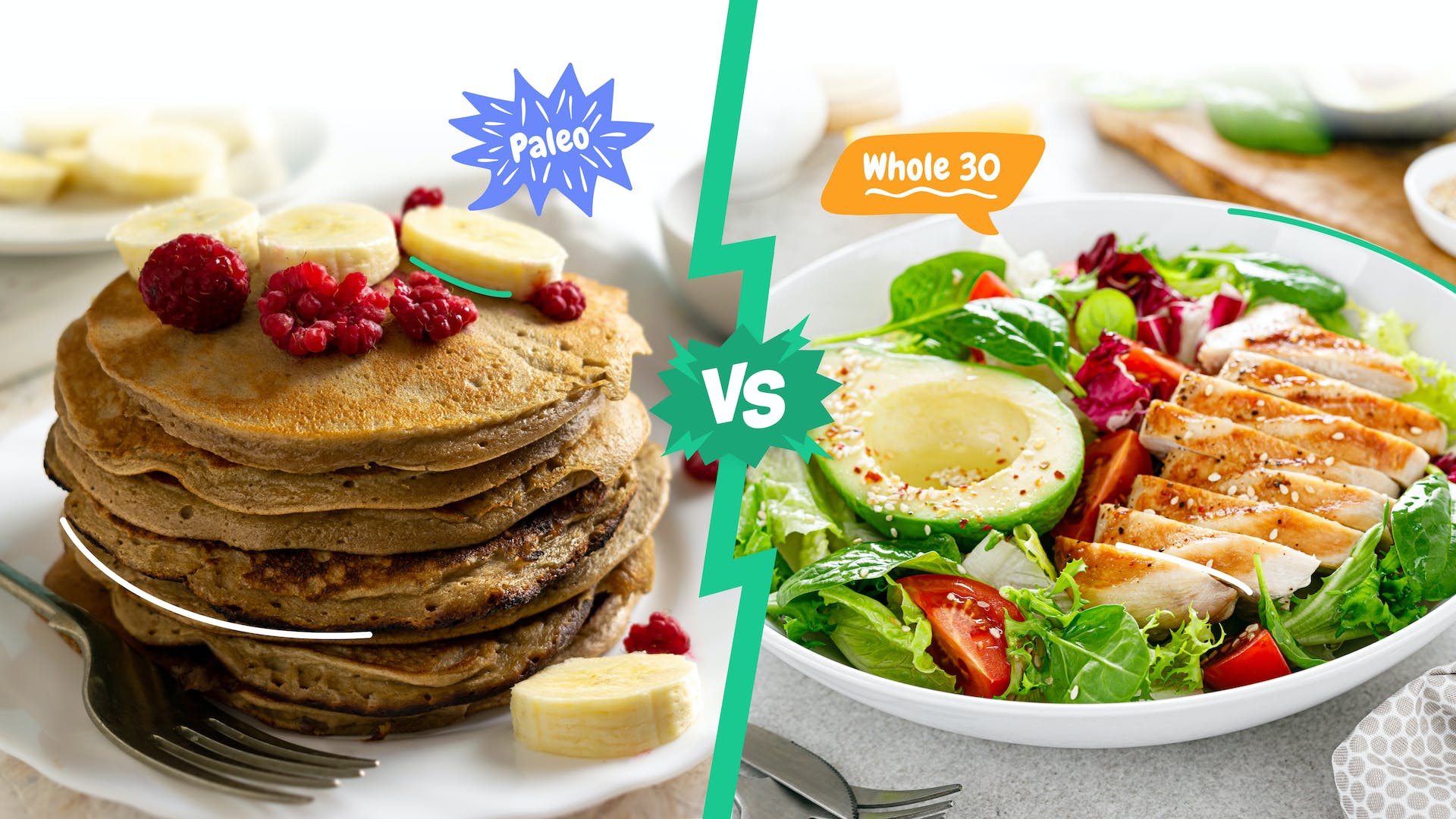 If you’ve been inhabiting the Keto world for some time, you’ve probably heard of clean eating, Paleo, Whole30, and several other types of “real food” diets. For many people, Keto and low-carb diets can be a gateway into the world of unprocessed, whole foods.

Paleo and Whole30 are two of the most well-known real food diets. After all, it was Paleo podcaster Sean Croxton who coined the term “JERF” — Just Eat Real Food.

However, while they do have several similarities, there are some key differences between Paleo and the Whole30 program. We’ll dive into the details below.

Paleo, or the Paleolithic Diet, is based on what our Paleolithic ancestors may have eaten. The idea behind the diet is that our bodies are more accustomed to eating these types of foods than their more modern and highly processed counterparts.

With Paleo, you avoid most highly processed, packaged foods. In addition, you avoid wheat and gluten-containing grains, beans and legume (including peanuts), peanuts, soy products, dairy, seed oils, and most added sugars (except for honey, maple syrup, and other natural sweeteners).

The diet prioritizes food quality, so many people on Paleo choose to buy organic produce and high-quality meats — like grass-fed beef, wild-caught fish, and free-range chicken.

However, there’s a lot of wiggle room within the Paleo diet too. Some people choose to include what are deemed 'gray area foods', such as sourdough bread, sprouted grains and legumes, or dairy products.

There are also many Paleo packaged foods. Some people may eat them because all of the ingredients are Paleo, while others may choose to exclude them because of their degree of processing.

Paleo offers a number of potential benefits that are supported by research. Research has shown that Paleo diets improve cholesterol and triglyceride levels, which may translate into improved heart health.[*][*][*]

Additionally, Paleo may improve blood sugar and insulin levels, which can help with weight loss and diabetes management.[*][*][*][*]

Finally, many people report following a Paleo diet (particularly AIP), with great success in helping manage digestive and autoimmune conditions. However, there still hasn’t been a lot of research on these topics.

However, Paleo can be expensive — especially if you’re regularly purchasing organic foods and free-range, grass-fed, or wild-caught meats.

Additionally, following a Paleo diet can severely limit your options for eating out — although more and more restaurants are starting to get on board with Paleo and other whole food diets.

Who Should Try It

Paleo is a good fit for many people. It allows for more carbs than a Keto diet, so it may be helpful if you want to lose weight without restricting your carbohydrates to a ketogenic level. It also may be a good fit for athletes looking to try a whole food diet since it does allow for a higher carb intake. Finally, although research is lacking, it may be worth trying if you have an autoimmune or digestive condition that you suspect may be exacerbated by certain foods.

What Is the Whole30 program?

Whole30 is an elimination diet program developed by holistic nutritionist Melissa Urban. It’s a strict, 30-day program that eliminates everything the Paleo diet does, plus:

If you mess up on the Whole30, even just slightly, you have to restart on day 1.

People follow the program for  various reasons, but most use it for weight loss or to help identify food sensitivities.

There hasn’t been any research on the effects of the Whole30 diet, but because of its similarities to Paleo, I suspect the benefits may be similar. Still, it’s a short-term diet, so you may not see huge, lasting benefits if you return to your prior eating habits after completing the Whole30.

Anecdotally, many people have completed the Whole30 program and have reported drastic improvements in their weight, digestive issues, autoimmune symptoms, skin health, and more.

Like Paleo, Whole30 can be expensive and may limit your dining out options — especially since it’s even more strict than Paleo.

There’s also not any research on the Whole30 diet specifically.

Who Should Try It

Whole30 might be worth considering if you’re interested in doing an elimination-style diet for symptoms you may be experiencing, like digestive complaints, skin problems, autoimmune symptoms, sleep issues, and more. Having said that, if you are experiencing any ongoing health issues, it is always advisable to seek professional medical advice first to rule out any underlying conditions.

Although  Whole30 may be helpful for weight loss, because it’s only for 30 days it’s not a program that I would recommend as a go-to weight loss strategy. Instead, something more long-term and sustainable — like Paleo or Keto — might be a better option.

How Are They Similar?

Both Paleo and Whole30 focus heavily on food quality, and many health professionals who advocate for these programs encourage purchasing the highest quality food you can. There is some research to support this, too.

Additionally, both diets emphasize the importance of whole, minimally processed foods. Several studies have shown that ultra-processed foods and foods high in added sugars are linked to weight gain, heart disease, diabetes, and even some types of cancer.[*][*][*]

How Are They Different?

There are a couple of key differences between the two eating styles, though.

First, Whole30 is designed to be a short-term, 30-day program. On the other hand, Paleo is a diet that can be followed on a long-term basis.

Next, Whole30 is much stricter than Paleo — limiting some things that are OK on Paleo. There’s also a “zero tolerance” policy for cheating while on Whole30. If you’re following a diet like Paleo, however, you may occasionally choose to eat non-Paleo foods for special occasions or take the 80/20 approach.

Which Is Better, Whole30 or the Paleo Diet?

To be honest neither is better than the other. They each have their place and in fact, can work really well together.

Since the Whole30 is a more extreme version of Paleo that is meant to be followed on a short-term basis only, it’s pretty natural to fall into a Paleo style of eating after you complete your Whole30.

Alternatively, if you suspect food intolerances, you may choose to move on to Whole30 after trying Paleo. It may give you some additional clarity about foods you might be sensitive to.

No matter which you choose, Carb Manager has recipes and meal planning tools to help you be successful.