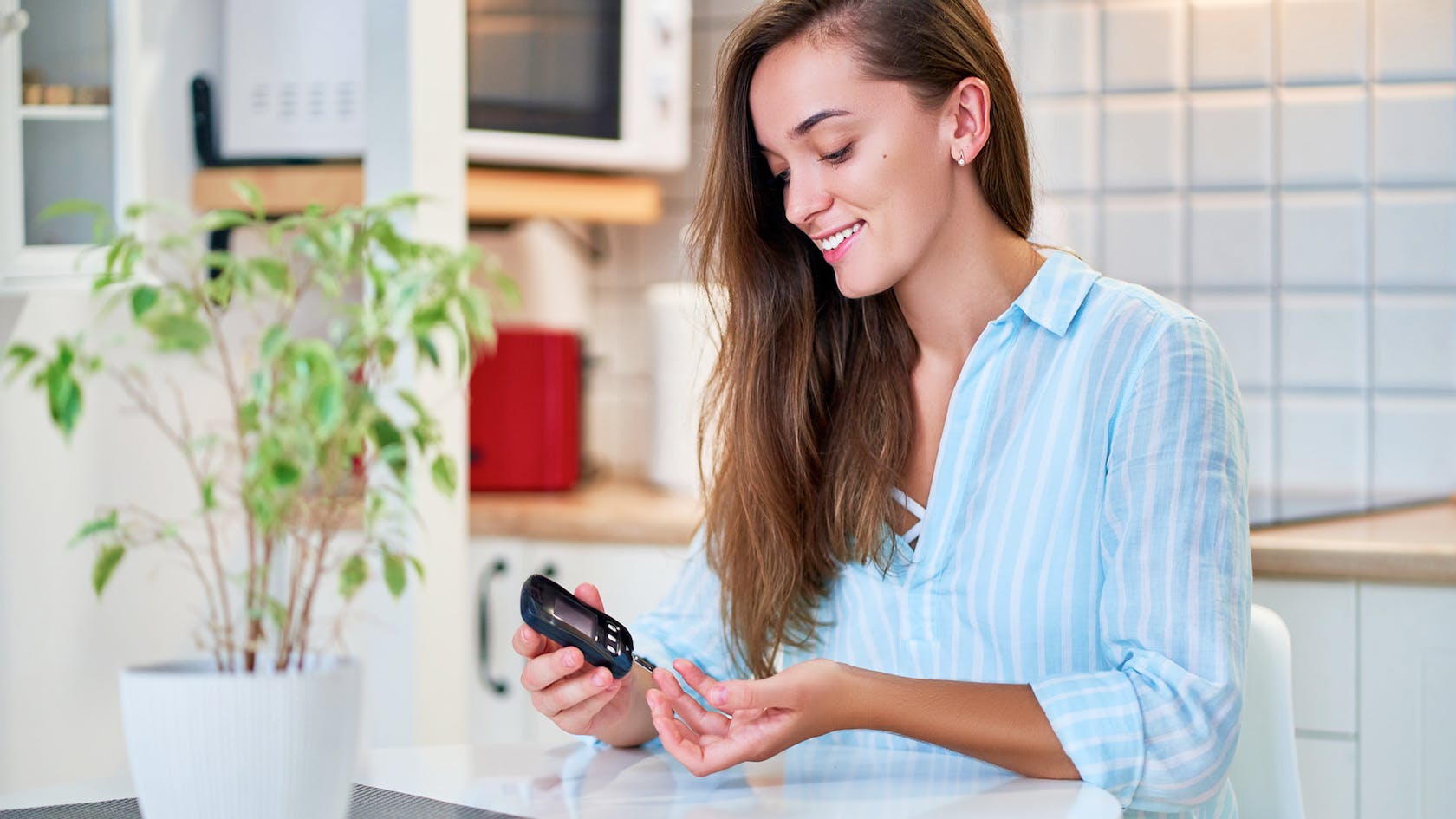 The Keto diet is unique. Unlike other diets, it has a measurable biomarker for success: the ketone.

By measuring your ketone levels, you can determine if you’re burning fat on Keto. It’s instant validation.

Because of this, some people become obsessed with ketone levels. If their ketones aren’t high enough, they think they’re failing.

But that’s not necessarily the case. It’s not a competition, and higher ketone levels aren’t always better.

So what should your ketone levels be? There isn’t a stock answer to this question. The answer will depend on your goals.

We’ll dig into numbers in a minute. First, though, let’s talk ketones.

Ketones are molecules produced through beta-oxidizing (burning) fatty acids in your liver.[*] Once in circulation, ketones fuel your brain, muscles, and other tissues.

Ketones have an evolutionary purpose. Our ancestors were often short on carbohydrates, which meant their levels of blood glucose (our default brain fuel) would fall.

That’s where ketones came in. In the absence of glucose, ketones supplied the brain with energy. They’re backup brain fuel.

This backup energy system is fairly simple to unlock. When you restrict carbs on a Keto diet, the hormone insulin stays low. Low insulin, in turn, signals your liver to burn fat and produce ketones.[*]

There are three types of ketones, also called ketone bodies:

BHB and acetoacetate both supply energy, while acetone is a seemingly useless byproduct of fat metabolism. When people talk about “ketosis” or “elevated ketone levels”, they’re usually talking about elevations in BHB.

What Level of Ketones Indicates Ketosis?

Ketosis means that ketones are elevated in the body, usually in the blood. But what level of blood ketones officially marks ketosis?

It depends who you ask, but the general consensus is that ketosis starts at 0.5 mmol/L BHB.[*] This is, to be clear, a measurement of beta-hydroxybutyrate circulating in the blood.

Above 3.0 mmol/L and up to about 8.0 mmol/L, one enters the realm of therapeutic ketosis. These higher levels of ketones are usually achieved by fasting, protein restriction, exercise, exogenous ketone supplementation, or some combination.

When ketone levels rise above 7 or 8 mmol/L, it may indicate a dangerous condition called ketoacidosis.[*] (Note: ketoacidosis may begin as low as 3 mmol/L for type 1 diabetics). Ketoacidosis primarily plagues type 1 diabetics because they lack the proper mechanisms to shut down fat-burning. It’s rarely a concern for healthy people following a Keto diet.

If you’re using ketosis to lose weight, maintaining ketone levels of 0.5 mmol/L-3.0 mmol/L is probably your best bet. Multiple studies have found that staying in nutritional ketosis with a Keto diet may help with weight loss.[*]

For instance, in a 2018 study sponsored by Virta Health, researchers kept 218 type 2 diabetics in supervised nutritional ketosis for a full year.[*] When the year was up, not only had the patients lost an average of 30.4 pounds, but 60% had “reversed” their diabetes as measured by HbA1c, a marker of average blood sugar.

Nutritional ketosis promotes weight loss by at least two mechanisms. First, it indicates that you’re burning fat for energy. If you want to lose body fat, you want to be burning it.

Elevated ketones also have a suppressive effect on appetite. In one study, obese people on a low-carb diet ate fewer calories than obese people on a calorie-restricted low-fat diet, even though the Keto folks didn’t consciously restrict portions[*] Other studies also show spontaneous calorie reduction on Keto.[*][*] Less energy in, less weight gained.

For goals such as stable energy, reduced cravings, weight loss, and mental clarity, you’re best served by maintaining nutritional ketosis. But what if you’re using ketosis to manage a specific medical condition?

In fact, the classic Ketogenic diet was originally developed back in the 1920s as a treatment for childhood epilepsy. Higher ketone levels were correlated with fewer and less severe seizures.[*]

Along with epilepsy, ketone levels above 3 mmol/L (up to around 8 mmol/L) may be therapeutic for conditions such as cancer, neurodegenerative disease, and autism.[*]

A quick disclaimer. Be sure to work with a medical professional if you’re using ketosis to manage any medical issue.

You can measure ketones in the blood, breath, and urine. Blood ketone readings are still the gold standard, but breath readings are catching up with devices like the BIOSENSE® breath ketone meter that measure acetone in the breath. (Breath acetone levels are correlated with blood BHB levels).[*]

What about blood ketone measurements? Check out the Keto-Mojo meter. It measures blood glucose along with ketones and syncs with your smartphone (plus the Carb Manager app) for easy tracking.

How Often Should You Test Ketones?

First, remember that it’s not strictly necessary to test ketones at all when you’re following the Keto diet. Many (maybe even most) Keto afficianados gauge whether or not they’re in ketosis based on what their body is doing and how they feel. Reduced hunger and more energy? You’re probably in ketosis!

Biohackers and followers of the “precision nutrition” movement test their ketones following every meal to get a sense for which foods and activities correlate to different levels of ketosis for their particular bodies. The BIOSENSE® breath ketone meter promotes this type of testing, and users of BIOSENSE + Carb Manager can actually cross reference this information right in the Carb Manager app.

But most people following a Ketogenic way-of-eating find testing multiple times a day to be overkill. It’s a lot more typical to test once a day over the first couple of weeks, and then once a week after that. This schedule provides reassurance that you’re on the right track without feeling like you’re constantly taking measurements.

Why Ketone Levels Aren’t Everything

When you measure your ketones and get a positive result, it can be a real confidence booster. It says you’re going in the right direction.

Taking the interpretation beyond that, however, may be problematic. First of all, science still hasn’t figured out the optimal level of ketones. We can say with some confidence that you don’t want 0 mmol/L BHB (which means you’re probably not burning fat), and that 0.5 to 3.0 millimolar BHB appears to be the green zone for nutritional ketosis. But we can’t say that 1.8 mmol/L is better than 0.8 mmol/L.

In fact, some folks see declines in blood ketones over time on Keto, despite positive results in all other areas. Why is this happening? It might be a beneficial increase in ketone utilization. In other words, fewer ketones are in the blood because more ketones are being utilized by muscle and brain tissue. It might be a sign of Keto-adaptation.

In addition, lifestyle factors like fasting and exercise can impact ketone levels, temporarily skewing levels one way or the other.

Simply fasting overnight (in other words, sleeping) may cause ketone levels to rise by .1 to .5mM. Longer fasts of up to 48 hours of fasting may result in ketone levels of 1 - 2mM, even if you weren’t in ketosis beforehand. Extended fasts may increase ketone levels even further.[*]

There isn’t a clear answer to this question. It depends on your goals, and perhaps your level of Keto-adaptation.

For most Keto goals, staying in nutritional ketosis (0.5 mmol/L-3.0 mmol/L) seems to make the most sense. But more therapeutic goals may benefit from higher ketone levels.

And remember, ketone levels aren’t everything. You didn’t go Keto to hit a certain level of ketones, did you? You went Keto to improve your health.

If you’ve been following Keto and aren’t seeing signs that your body is in ketosis—or you’re actually testing and not seeing your ketones trending upward—check out this article for troubleshooting tips.

Bottom line: pay attention to energy levels, appetite, sleep, bodyweight and other health metrics first—and ketones second. This approach will serve you well in your quest for health and happiness

Note: Individuals with a history of health conditions such as type 1 diabetes should consult a health professional prior to making any diet or lifestyle modifications.