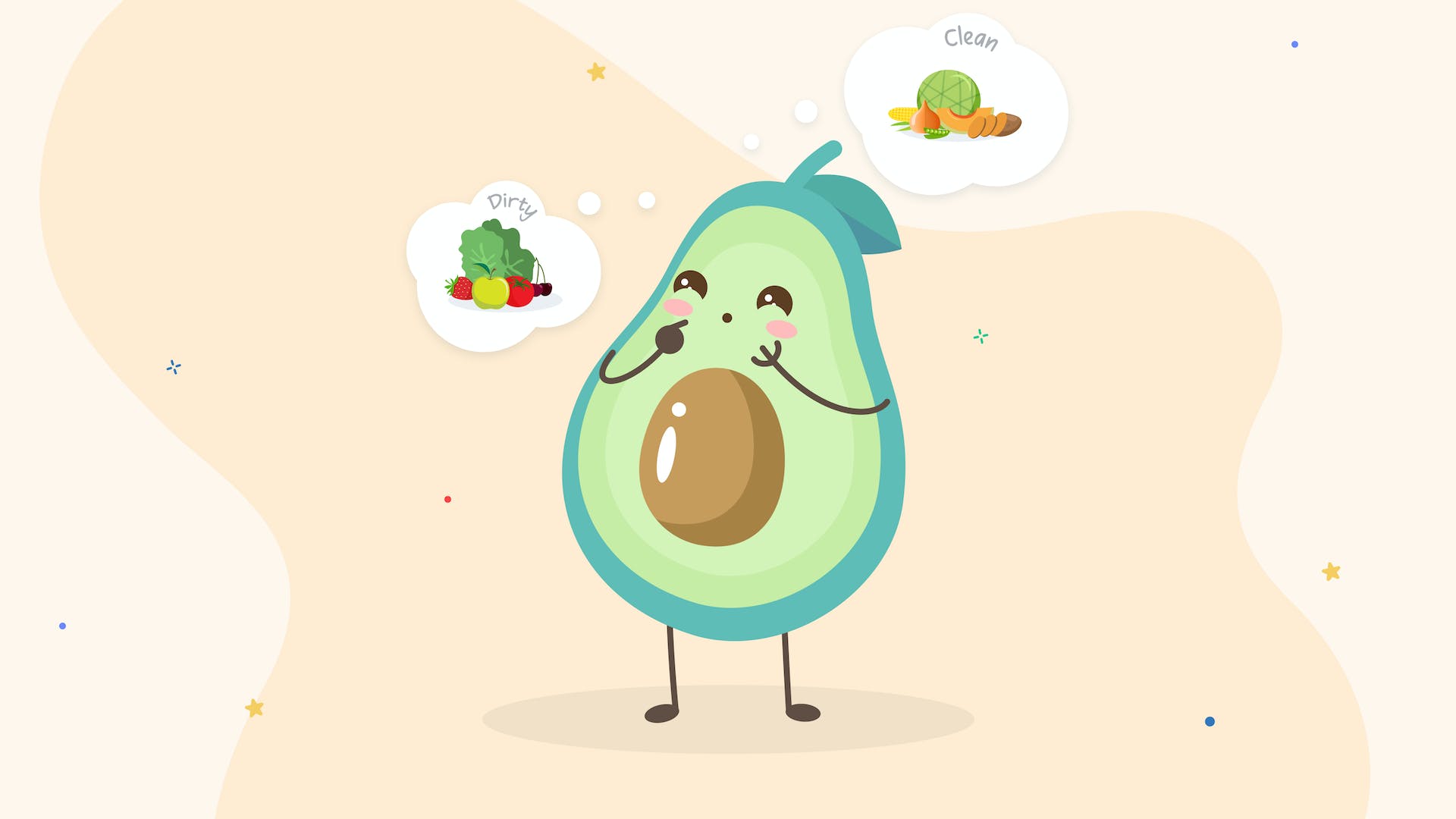 Dirty Dozen Foods: How To Avoid Pesticides on a Budget

Dirty Dozen Foods: How To Avoid Pesticides on a Budget

If you want to reduce your pesticide exposure, you need to be aware of the Dirty Dozen foods. These twelve fruits and vegetables have more chemical residues than other produce.

But how worried should you be about pesticides? Can you wash them off? And if you're on a budget, must you always eat organic?

We'll answer these questions in a moment. But first, let's review the Dirty Dozen and Clean 15 lists.

What Do Dirty Dozen and Clean 15 Mean?

Each year, the Environmental Working Group (EWG) publishes its "Shopper's Guide To Pesticides in Produce."[*] The 2022 guide ranks 46 common fruits and vegetables for pesticide contamination.

Rather than test for pesticides, the EWG relies on data from about 45,000 produce samples published by the Department of Agriculture and Food and Drug Administration.[*] Disturbingly, about 70% of samples contained residue from at least one type of pesticide.

The EWG uses a composite score to determine the Dirty Dozen and Clean 15 rankings. Factors influencing the score include:

If the food falls into the top twelve or bottom fifteen—and it's a commonly consumed fruit or vegetable—it makes the cut.

How worried should you be about pesticides? Let's examine a few data points.

To start, most people have some level of pesticide exposure. According to the CDC, most Americans aged six and older have detectable pesticides in their blood and urine.[*]

Other studies suggest that blood pesticide levels drop when people switch from conventional to organic foods.[*][*] So diet matters here.

Another disturbing data point: a class of pesticides called organophosphates appears to impair cognitive abilities in developing children.[*] Compared to adults, infants are far less able to detoxify these compounds.[*]

A 2011 paper found that higher exposures to one such compound (chlorpyrifos) correlated with lower IQs and working memories in young children.[*] Fortunately (or should we say, finally), the EPA banned chlorpyrifos in food crops in 2022.[*]

Another organophosphate—the ubiquitous pesticide glyphosate—is classified as a "probable carcinogen."[*] This doesn't mean conventionally-grown kale will give you cancer, but it's not comforting.

Bottom line? We're still unravelling how pesticides affect human health, but the safe path is to avoid them when possible.

What are the Dirty Dozen Foods?

Should you avoid these foods entirely? That depends on your alternatives.

If you're choosing between a conventional kale salad and General Tso's (fried) chicken for lunch, the kale is preferable. A few pesticides can't compete with the added sugar, heated vegetable oils, and strange preservatives that compose addictive Frankenfoods.

And while organic produce usually has more antioxidants, conventional produce is still nutritious.[*] Plus, you can rinse off some of the pesticide residues. (More on that soon.)

Yet the best way to avoid pesticides is to buy organic strawberries, spinach, kale, etc. And if your store's organic section is the size of a small bird's nest, prioritize items on the Clean Fifteen list instead.

What are the Clean 15 Foods?

Clean Fifteen foods have the lowest pesticide levels of 46 common fruits and vegetables. Here’s the list[*]:

You'll notice many of these foods have impermeable skin. The tough shell of the avocado, the thick hull of corn, the papery covering of the onion, the spiked armor of the pineapple.

The armor keeps pesticides out. It also keeps your food fresh for longer.

Even when you forget the list, you'll remember thick skin keeps pesticides out. Thin or permeable skin (think: strawberries) lets them in.

Can You Clean Dirty Dozen Foods?

You can reduce pesticide residue by washing produce with water. But don't expect this solution to be 100% effective.

Pesticides absorb into the plant matter. Rinsing won't remove those.

Also, the FDA and DoA primarily test produce that's ready for consumption. In other words, it's already been washed.

The best solution is to buy foods with fewer pesticides. But can you do that economically?

Avoiding Pesticides on a Budget

Yet avoiding pesticides and saving money aren't mutually exclusive. You can do both.

One strategy is to be selective about your organic purchases. Prioritize organic Dirty Dozen foods, and go conventional for the Clean Fifteen.

Get out your wallet for organic kale, spinach, and grapes. Put it away for organic avocados, mushrooms, and melons.

Also, local farms often lack organic certification (it's a rigorous procedure), but their comestibles may be pesticide-free. Be bold and ask the farmer or store owner for more information.

Every day of transportation is a day of declining nutrient density. The closer you are to home, the healthier it is. (Gardening, anyone?)

One last point. Unless you grow all your food, it's virtually impossible to eliminate 100% of your pesticide exposure. It's not a realistic goal.

Instead, snag the low-hanging fruit. (Pun intended.) Be mindful of the Dirty Dozen list, and you'll be doing better than most.