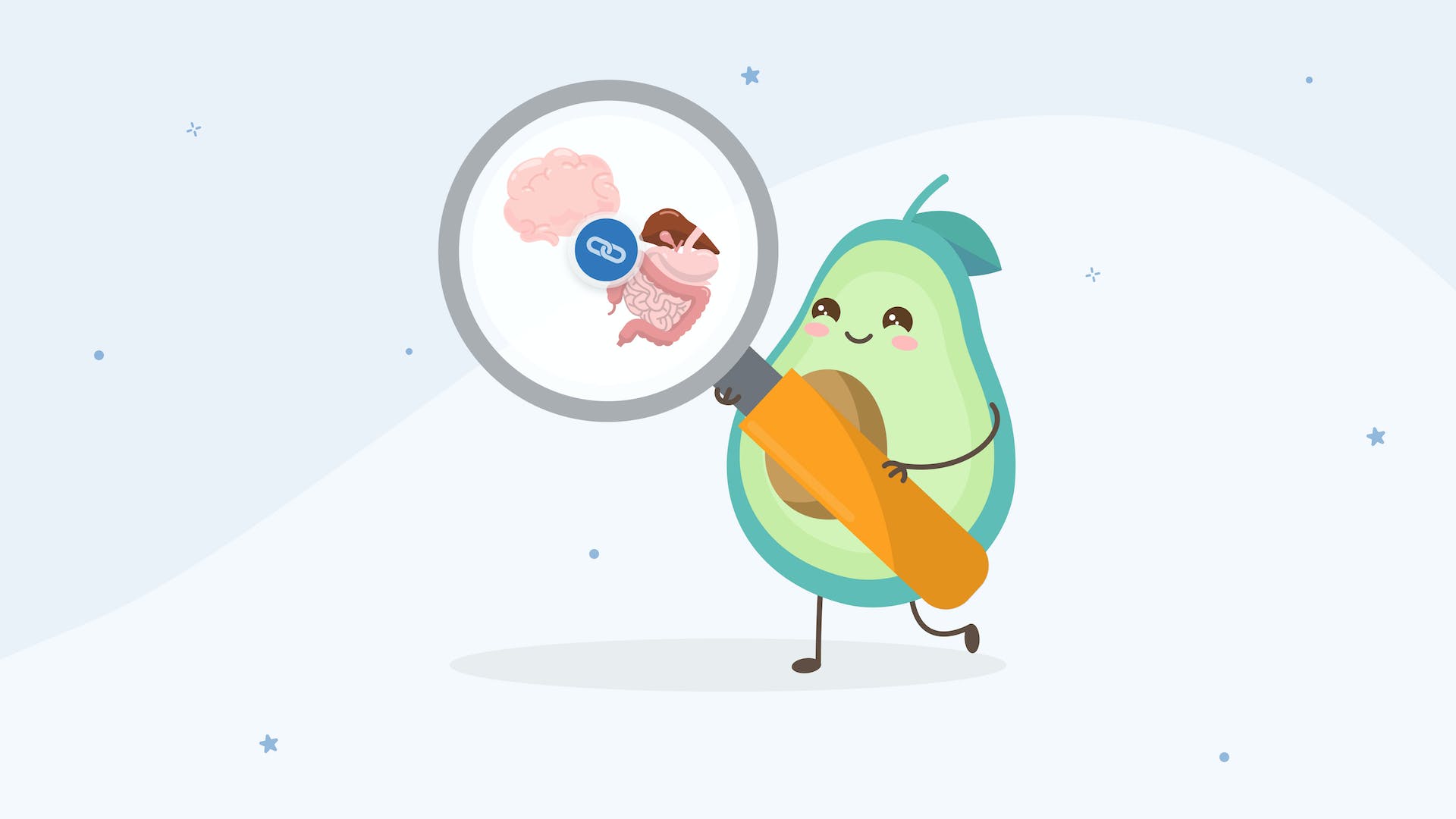 The Gut-Brain Axis: How To Make Your Gut and Brain Happy

The Gut-Brain Axis: How To Make Your Gut and Brain Happy

These are just two examples of the gut-brain axis. What happens to one influences the other, and vice versa.

For smoother digestion, lower inflammation, and a brighter mental state, you must simultaneously care for the gut and brain. Keep reading to learn how.

What Is the Gut-Brain Axis?

The gut-brain axis describes the bidirectional relationship between[*]:

Let’s review how the gut and brain interconnect.

The central nervous system is like your CEO, but it’s not the only hub of bodily control. The gut is also lined with millions of neurons that comprise the enteric nervous system.

The enteric nervous system regulates digestion, blood flow, and other functions. This “second brain” connects to the actual brain via the vagus nerve.

You’ve probably heard of neurotransmitters. These chemical messengers regulate mood, digestion, sleep, and many other functions.

Take serotonin, a neurotransmitter famous for influencing mood. More than 90% of your body’s serotonin is produced in the gut.[*]

Along with mood, serotonin also regulates gut motility.[*] (A serotonin imbalance may cause diarrhea or constipation.) That’s why drugs that act on serotonin, like SSRIs, are indicated for irritable bowel syndrome (IBS).

Relevant here: a person’s serotonin balance (and balance of other neurotransmitters) depends on the trillions of bacteria, yeast, and viruses colonizing the gut. Yes, your gut microbiome helps make neurotransmitters.

How does an optimal gut microbiome look? It depends on the person, but supplementing with certain microbes (called probiotics) has been shown to improve digestion, lower inflammation, and boost mood in animals and humans.[*]

The gut houses about 70-80% of all immune cells.[*] So when something disturbs your digestive system—a virus, trigger food, stress, etc.—immune activity (inflammation) soon follows.

And when inflammation is present, depression may be present too.[*][*] The most direct evidence for this theory comes from a study you wouldn’t sign up for.

In the experiment, researchers injected twenty men with either Salmonella endotoxin (yes, Salmonella) or saline solution.[*] The Salmonella group showed higher levels of inflammation in response to the poison and exhibited symptoms of anxiety and depression.

IBS and Other Conditions Linked to the Gut-Brain Axis

IBS is a label for chronic stomach pain and irregular bowel habits. Since up to 20% of the global population suffers these symptoms, it pays to explore what causes them.[*]

The symptoms aren’t just gut symptoms. For instance, over 80% of IBS patients also suffer from anxiety or depression.[*]

Likely both. For example, stress fires up the immune system and can cause “leaky gut,” a state of gut permeability that leads to GI symptoms.[*]

We also know that inflammatory cytokines can cross the blood-brain barrier and derail your mood. Remember the salmonella study?[*]

It’s a bidirectional relationship. You need to mind both sides of the equation.

Researchers also look to the gut-brain axis to explain neurological disorders, including:

To be clear, the research is still early days. But we don’t need a PhD in the microbiome to live in ways that support the gut-brain axis.

To support your gut and brain, focus on avoiding inflammatory foods. The more you limit inflammation, the better your gut-brain axis will function.

You should also lance vegetable oils like soybean oil, peanut oil, and sunflower oil. Like sugar, excess omega-6 consumption has been linked to chronic inflammation.[*]

So what should you eat? Simple: eat whole foods that agree with you!

If a food is causing symptoms—GI or otherwise—it’s probably causing inflammation. Eliminate the food and try it again in about a month.

What about fiber? For folks with healthy guts, higher fiber intakes are usually better.

Experiment with carbs and fiber to see what best suits your digestion and cognition. Some folks do best with minimal carbs (aka, Keto), but others don’t.

Other Ways to Support a Healthy Gut-Brain Axis

Supporting your gut-brain axis is a holistic endeavor. Eating healthy is just one piece of the puzzle.

Here are some other puzzle pieces:

You don’t need to be perfect in every area, but perhaps you can make one or two adjustments. Even a tiny improvement in your gut-brain axis can significantly improve your quality of life.